Is Your Home Affected by Water Hammer? 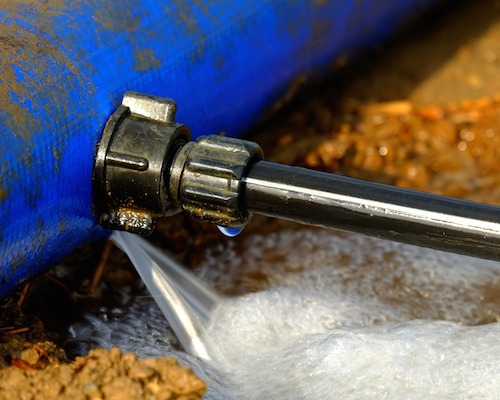 Have you been dealing with a banging sound whenever you flush the toilet or use the washing machine?

This annoying sound is known as “water hammer”— a surge of pressure that is caused by a sudden change in water’s momentum.

While many think it’s nothing more than a pesky sound, it can actually do some real damage to your plumbing system.

Without a doubt, this is the loudest and most annoying plumbing problem found in the home.

Water hammer occurs when a faucet or appliance quickly shuts off the flow of water.

Water moves quickly into the fixture or appliance, causing a shock wave causing the pipes to bang against each other or against wood framing members (wall studs, floor joists, etc.).

It can be caused by any fixture or appliance that uses water, but some of the most common culprits are washing machines and dishwashers.

Thanks to their powerful valves, these 2 heavy-duty appliances shut off the flow of water much quicker than other appliances.

Water hammer is nothing new, which means there are a few ways people have dealt with it in the past.

Older homes typically have pipefittings called air chambers located on each hot and cold water line at or near each faucet or water inlet valve and are rarely visible.

Air chambers act as a shock absorber for water flowing at a high speed.

However, over time these chambers can fill up with water and will need to be drained.

If you run into this issue, you can recharge water-filled chambers by shutting off the water supply and draining the pipes. This allows air to fill the chambers. It gets trapped there when the water is turned back on.

If you run into problems with the air chambers, then there is an alternative option.

Usually, the best long-term solution for eliminating water hammer is to install a water hammer arrestor on each water supply line that makes noise.

A water hammer arrestor works much like an old-style air chamber but includes an air- or gas-filled chamber is sealed by a diaphragm or piston.

There are various types of arrestors, but the two most common are:

The year in which your home was built can give you a good idea of the water hammer protection your house has.

In some cases there are other reasons for banging pipes:

If you have functioning air chambers or water hammer arrestors, you might have a different problem:

Have you been dealing with banging pipes? Let EIG put your mind at ease with a home inspection so you can address any home problems before they grow into something bigger.

Summary
Article Name
Is Your Home Affected by Water Hammer?
Description
Knocking pipes can be an annoyingly common occurrence, but may be a sign of a larger plumbing issue. Find out if your home has been affected by water hammer.
Author
Garrett Hand